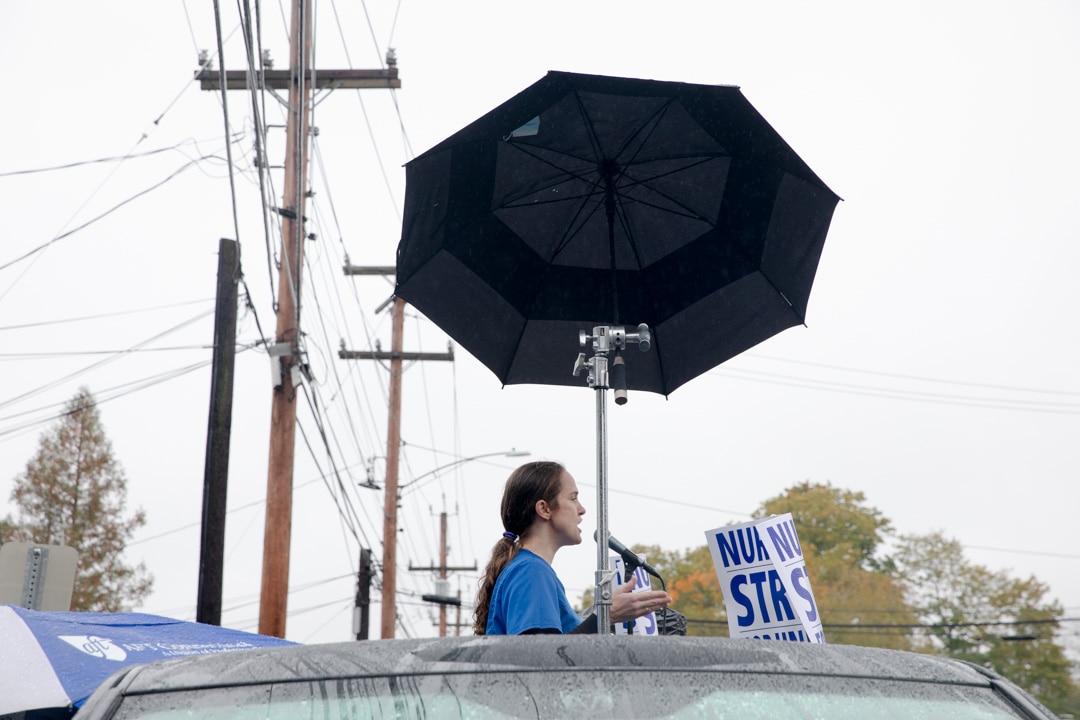 Sherri Dayton, a nurse at Backus Hospital and president of the Backus Federation of Nurses, addressed the crowd outside the hospital Tuesday.

More than 400 nurses from Backus Hospital went on strike for two days, beginning this morning, after the nurses’ union and the hospital failed to reach an agreement over a new, three-year contract in the midst of the pandemic.

Both sides called the timing distressing, but said they were unable to move forward with a deal.

“I don’t even think ‘difficult’ defines it. It’s devastating,” Sherri Dayton, a registered nurse at Backus who is president of the Backus Federation of Nurses, said Monday night. “I just punched out of my last shift and it was a very busy shift. To clock out and wonder about who’s taking care of them tomorrow and how it’s going to happen – it’s driving me crazy. The stress is unbelievable.”

Donna Handley, president of Backus, said in a statement that over the course of 23 bargaining sessions, hospital officials have addressed key issues, including staffing and personal protective equipment.

The Backus Federation of Nurses, part of AFT Connecticut, authorized the two-day strike to put pressure on the Norwich facility. The strike comes as Norwich and the nearby city of New London are seeing an uptick in coronavirus cases, and just weeks after nine employees at Backus tested positive for COVID-19 in an outbreak that began at a local nursing home and moved to the hospital.

“The hope is that the two days move hospital management and executives with Hartford HealthCare to take more seriously the issues we’ve been trying to resolve in contract negotiations and bring about a settlement,” said Matt O’Connor, a spokesman for AFT Connecticut. 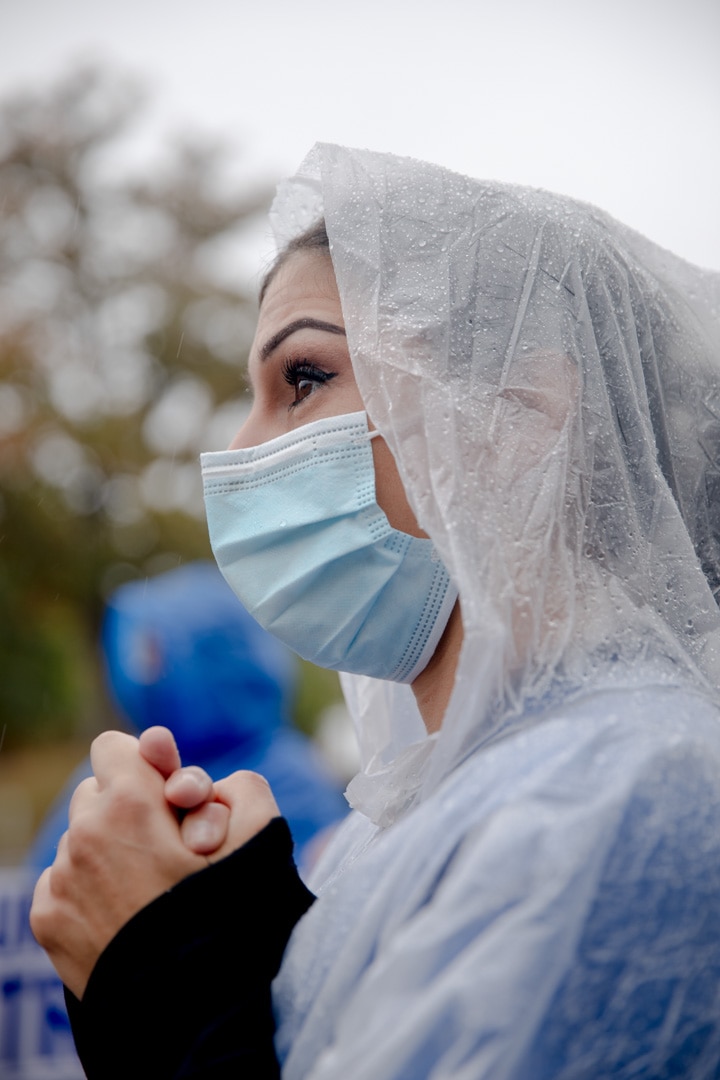 Anah Deangelis, a nurse at Backus Hospital, listens to a speech during the rally Tuesday morning outside the Backus Hospital in Norwich. “I’m here for my patients,” she said. “It’s for the safety of our patients. That’s why I became a nurse because I love my patients, and I want to have safe staffing for them. I want to give them the best care I can. And it’s not possible. With the staffing ratio inside, we’re not able to give our patients that safety in the time that they need.”

As the strike began Tuesday morning, nurses and union officials gathered in the rain outside the hospital for a rally. Nurses who spoke at the rally said the hospital has not provided adequate personal protective gear for the staff, forcing them to reuse masks and other equipment while keeping unused PPE locked up in a manager’s office instead of being readily available.

Shanon Pereira, a nurse at Backus, said she was “taking every precaution I knew to prevent bringing this deadly virus home to my family.” Despite that, she contracted COVID-19 in August during an outbreak on her unit and spread the disease to her husband, child, and her parents.

Other nurses on the unit also contracted the disease, she said, and the hospital blamed the outbreak on a “lapse in proper use of PPE as the cause.”

“The feeling of those that became ill were of disrespect and disgust at the treatment of our employer,” Pereira said.

The nurses’ contract was set to expire on July 1, but the union and the hospital agreed to a two-month extension. Both sides failed to reach a deal by Sept. 1, however, and the contract expired. O’Connor said the nurses have asked for better wages and health insurance, but he did not provide specifics on the requests. They also are seeking more protective gear.

The hospital’s wages make it difficult to attract and retain nurses, O’Connor said, leading to frequent turnover. Under Backus’ proposal, nurses there would earn an average of 14% less than those at Windham Hospital and 16% less than nurses at Lawrence + Memorial Hospital – both of which are located about 30 minutes from Backus, according to the union.

The average starting salary for a registered nurse at Backus is $29.59 per hour. At Windham, it is more than $32 per hour, Dayton said. The union is “aiming for comparable wages to Windham Hospital,” she said. 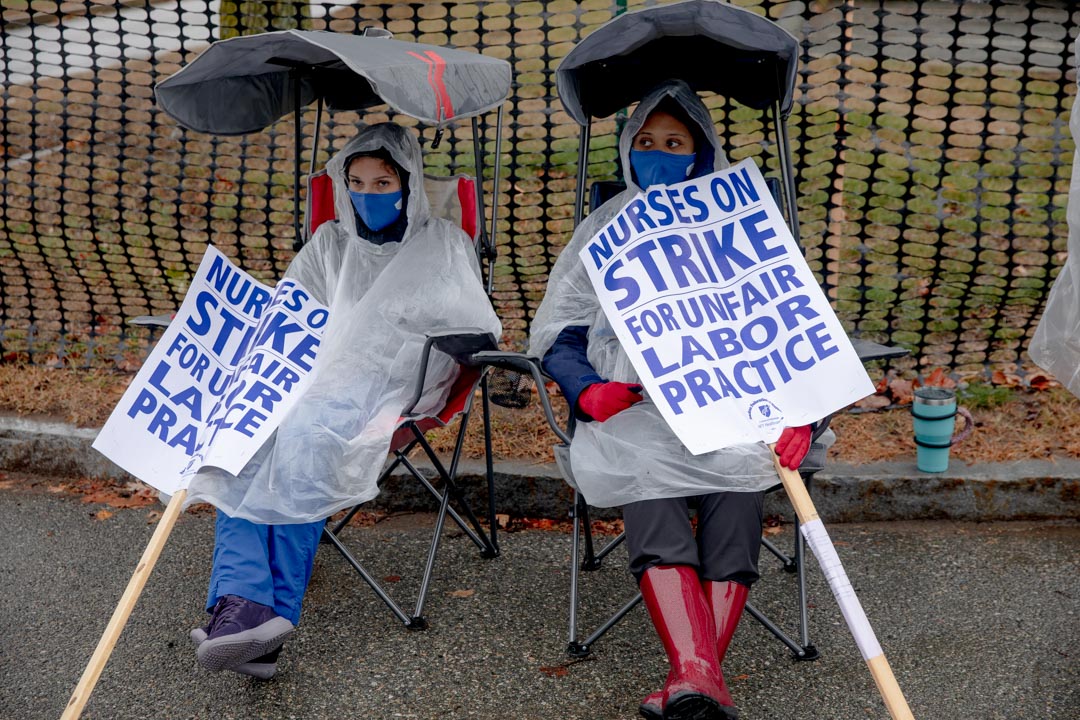 Calla Contos, left, and Cyanna Johnson, are two of the nurses at Backus Hospital who went on strike Tuesday.  Johnson came to the strike straight after working from 7 p.m. to 7 a.m. “Somebody always has to be out here to show that we’re united for it. So rain or shine, we have to be here,” Johnson said.

Labor officials met with hospital executives Friday, but failed to reach consensus on several issues. During a subsequent meeting on Sunday, “we actually did make movement on some issues, but not enough to reach a full settlement and call off the strike,” O’Connor said.

Handley said the hospital offered “significant” wage increases, amounting to 12.5% over three years, along with additional paid time off for 82% of the nurses and a 2% decrease in health insurance premiums during the first two years of the new contract.

The hospital also retained jobs at a time when other health care facilities are laying off workers, she said, and it provided staff with more paid time off during the pandemic.

“In all of these and other ways, Backus Hospital has shown that we respect our nurses, we are prepared to find common ground, and we want to reach agreement on a fair contract,” Handley said. “I apologize for the concern that I know this is creating for our hospital, our nurses and our community.”

Four hundred and fifteen nurses from Backus and its outpatient centers are on strike Tuesday and Wednesday. Backus will remain open during that time.

Officials with the state Department of Public Health said they are making sure there are adequate replacement nurses to cover the shifts and conducting random, daily visits to monitor patient safety and quality standards.

“As of this morning we have executed our operations plan to verify training of any replacement nurses at Backus Hospital and conduct health and safety inspections at the hospital now that the strike has started,” Deidre Gifford, the state’s acting public health commissioner, said Tuesday. “We have a qualified team of inspectors at DPH authorized to conduct as many on-site strike monitoring inspections as needed at any time of day during a strike.”

O’Connor said the union does not yet have plans for how it will proceed if a deal is not reached in the coming days.

“Obviously, our members would prefer to be at patients’ bedsides. Striking is not their first choice by any stretch,” O’Connor said. “They waited for the expiration of the contract extension. They waited another two weeks before they even took the strike vote, and then they waited another two weeks to call the strike. They’ve really held out for a mutual settlement in the hope that one could be achieved, as opposed to having to walk the picket line.”

Last month, at least nine employees at Backus tested positive for COVID-19 after the hospital took in residents from a nearby nursing home, Three Rivers in Norwich. Hartford HealthCare executives said a Backus worker failed to wear a mask properly around the patients. That worker apparently spread the virus to colleagues.

The state has ordered the removal of all residents from Three Rivers, where 27 people were infected with coronavirus and at least four died. The state arranged for the home’s 53 remaining residents to be transferred to other facilities.

Between Sept. 20 and Oct. 3, New London recorded at least 115 new COVID cases, raising the daily case rate to 30.5 per 100,000 population, according to the state Department of Public Health.

Yehyun Kim contributed to this story.

Tue Nov 10 , 2020
By Archive Email Craig Clough ” href=”https://www.law360.com/#”>Craig Clough Law360 is providing free access to its coronavirus coverage to make sure all members of the legal community have accurate information in this time of uncertainty and change. Use the form below to sign up for any of our daily newsletters. Signing […]