“I went through the CDC data, because I kept hearing about new infections, but I was like, ‘Why aren’t they talking about deaths?’ ” Trump Jr. said. “Oh, because the number is almost nothing. Because we’ve gotten control of this thing, we understand how it works. They have the therapeutics to be able to deal with this.”

Trump Jr. appears to have conflated two figures: the number of new deaths and the death rate, as a percentage of covid-19 cases. The raw number of new deaths has held fairly steady in recent months, with the seven-day average hovering at around 800 in the past week, according to data tracked by The Washington Post.

Medical advances and less-crowded hospitals, meanwhile, appear to have reduced the death rate from the early days of the pandemic — but scientists warn that it’s not clear whether that’s a long-term trend, The Post previously reported. As cases surge across the United States, fatalities are often a lagging data point for CDC researchers, and reports can be incomplete in capturing the actual rate at which people are dying from the virus and its complications.

Physicians are also fearful that the latest burst in new cases, including a record 89,940 on Thursday, will lead to a greater number of deaths in the coming weeks, according to the New York Times.

“This is still a high death rate, much higher than we see for flu or other respiratory diseases,” Leora Horwitz, director of NYU Langone’s Center for Healthcare Innovation and Delivery Science, told the Times about the current death rate. “I don’t want to pretend this is benign.”

On Thursday night, though, the president’s eldest son pointed to a post from his Instagram account that he argued painted a clearer picture of the present state of a pandemic that has killed at least 228,000 people in the United States.

“If you look at my Instagram,” he said, “it’s gone to almost nothing.”

At least 1,063 people in the United States died of the novel coronavirus Thursday, the second-highest daily total for October, and 5,668 have died in the past seven days. This week has also featured two consecutive days of more than 1,000 deaths, marking the second time that has happened in as many weeks, according to The Post’s coronavirus tracker.

The discussion on Fox was sparked by an earlier segment on CNN, when Sanjay Gupta advised President Trump’s supporters not to attend his rallies. Gupta, the network’s chief medical correspondent, reported that new coronavirus cases had increased 82 percent of the time in counties that hosted a total of 17 rallies for the president between August and September. The infection rate in those counties had also climbed at a faster clip than the overall rate for their state, CNN reported.

Gupta noted that if anyone had been to one of Trump’s outdoor rallies, which have attracted thousands of maskless supporters not adhering to social distancing recommendations, they should assume they have been exposed to the coronavirus and quarantine for 14 days.

“Don’t go to these rallies,” Gupta said. “Look, just about anywhere in the country now, if you go to a gathering that’s several hundred people, it’s without a doubt the virus is attending that rally with you.”

On Fox, Ingraham said that Gupta’s words, along with Minnesota’s covid-19 guidelines capping the number of attendees at the president’s planned Friday rally to 250 people, was “a part of a larger media effort” to discourage attendance at Trump rallies. The president later tweeted his displeasure over the Minnesota limitations.

“Don, is he kidding me?” Ingraham asked Trump Jr., referring to Gupta. “They are pulling out all the stops. Now the virus is attending the rally. Apparently, they’re waving flags, too.” She added later, “A tragedy is not a reason to take people away from their candidate.” Trump Jr. scoffed at Gupta, calling him a “moron.”

Trump Jr.’s claim that death rates were now at “almost nothing,” captured in a clip that had been viewed more than 2 million times as of early Friday, prompted a strong response from critics and medical experts.

Alexis C. Madrigal, a staff writer at the Atlantic, concluded that Trump Jr.’s statement “may result from a common misinterpretation of CDC provisional death counts,” noting that incomplete data for recent weeks would incorrectly show deaths to be in decline.

Ashish K. Jha, a physician and the dean of the Brown University School of Public Health, suggested that the claim showed a lack of empathy.

“I realize I am naive,” Jha tweeted. “But I’m still shocked by the casualness by which our political and media leaders and their families dismiss the daily deaths of nearly a thousand Americans.”

Marisa Iati contributed to this report.

Fri Nov 6 , 2020
The cluster ultimately involved 42 employees and 15 patients. None of the 57 became critically ill from COVID-19; one employee was briefly hospitalized but has gone home and is recovering, a hospital spokeswoman said. But the outbreak shook the hospital and led to a massive effort to figure out what […] 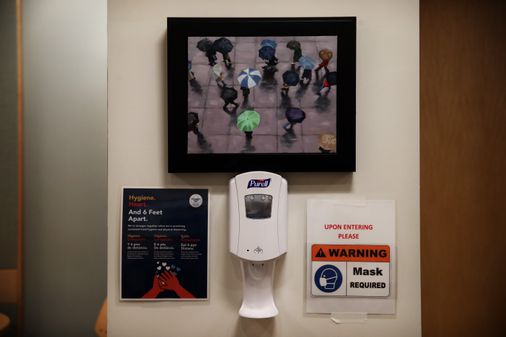