OAKLAND, Calif. (KGO) — Friends of Lili Xu, a beloved and highly-skilled dentist in Oakland and Castro Valley, shared their pain and called for local leaders to bring the people responsible for her death to justice.

Nelson Chia has been partners with Lili for more than a decade and had a deep and special bond. An immigrant from China, Lili blossomed into a highly accomplished and beloved dentist, with a practice in Oakland’s Chinatown and in Castro Valley.

While the details are hazy in his mind, Nelson says he just remembers a blur of activity just after 2 p.m. Surveillance shows what OPD describe as an older model Lexus sedan pull up to where Nelson and Lili were parked. Her screams can be heard before multiple gunshots ring out.

“When I got out of the car and started maneuvering between the back door and the trunk I heard two of three bang, bang, bangs. All of a sudden there was a flash. I ran around the side of the car and she was on the ground. She was semi-conscious and not really able to respond.”

Nelson says Lili was hit twice in the back. Nothing was taken. Those five seconds, changed his life forever.

He held Lili in his arms until the ambulance arrived. Later that evening, she was pronounced dead at the hospital.

The Little Saigon and Oakland community’s anger and frustration boiled over at a rally Monday afternoon.

Lili’s wide group of friends who just celebrated her 60th birthday earlier this month attended today’s rally and made a call for action.

“We want justice, we want safety for people, we want to live in a place where your friends and family will be safe.”

They don’t believe this was an attempted robbery as reported by Oakland police. But an example of the pandemic of hate.

Nelson’s sister recalls some of the previous news coverage of Asian Americans being attacked.

“So many Asians are being killed, we’ve got to do something to prevent more killing,” she said. This includes the killing of Uber driver Patrick Fung in July. He was gunned down in front of his girlfriend’s home not far from Little Saigon.

On Monday night, people gathered near the spot on Fifth Avenue where Lili Xu was murdered.

Surveillance video showing the incident unfolding, and Xu’s life being taken away with the sound of three gunshots.

Xu was a local dentist and ballet student, an active and beloved member in her community.

Zhang was one of her patients as well as her dance instructor.

She came to pay her respects to her friend of many years. She says she’s still in shock.

“Immediately I was just tearing. I was crying. I made a lunch, I couldn’t eat,” Zhang said.

VIDEO: Asian Americans least likely to feel like they belong in US, study finds

With two murders and countless robberies occurring in the area in the span of just a couple of weeks, ABC7 News asked what tangible steps they’re taking to put an end to the violence.

Council President Nikki Fortunato Bas telling us, she believes the solutions have to be multi-faceted.

“We have to get guns off the streets. One of the other things that I think is really important is that the police need to focus on solving these crimes,” she said.

But until relief comes, many in the local community will continue to live in fear.

Unsure of how to finally stop the violence.

“They want to have a normal life. They can’t walk down the street, they can’t go anywhere without the fear,” Zhang said.

Nelson addressed the violence in his once beloved hometown.

“I’ve always tried to sell people on the fact that Oakland is okay. And I realize that story is more difficult to swallow as each year goes by.”

If you’re on the ABC7 News app, click here to watch live

Thu Aug 25 , 2022
Mourners remembered a slain Chinatown dentist as a dedicated practitioner and budding ballerina – one whose life came to a “senseless” end in a brazen, botched robbery while she visited Oakland’s Eastlake district. Their heads bowed around a shrine of flowers and slow-burning incense, dozens of friends, city leaders and […] 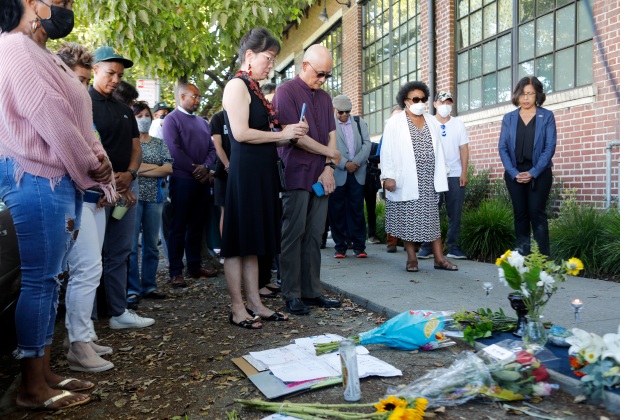