Lorrie Ward said it never entered her mind to become a fitness instructor. Now a year after she started teaching, Ward has a loyal following at the Madison Improvement Club in Phoenix.

The 62-year-old fitness instructor is committed to creating a space for people 65 years and older to confidently work out. Ward was a finalist in the 2022 Instructor of the Year Award from SilverSneakers, a national fitness company that caters to seniors staying active.

Ward speaks in a lively, enthusiastic way and expresses genuine care for her students. She says fitness has always been her passion, even before she became an instructor.

Ward said she played basketball in high school and received a basketball scholarship for college, and she also used to play softball. But beyond that, she said she also taught her children how to play several different sports and was always working out in some capacity.

“I come from a family of eight children, five boys. So, to make the teams even growing up I was the sixth participant,” Ward said. “I guess you could say I’m a tomboy.”

Ward’s best friend and the former owner of SilverSneakers, Mary Swanson, 67, was the one who pushed her to teach her first class. Swanson opened her own fitness center, The Madison Improvement Club, after selling her company, and in 2021 she insisted Ward teach a SilverSneakers-partnered class.

“She’s the wind beneath my wings,” Swanson said. “… I just encouraged her to give it a try and she was just a natural.”

Ward worked at SilverSneakers for 15 years doing network development and eventually serving as the Director of Operations, but she said it never entered her mind to become an instructor. Now a year after she started teaching, Ward has a loyal following at The Madison, including Swanson.

Ward teaches an 11 a.m. strength circuit class every Tuesday and Thursday at The Madison’s Phoenix location through the SilverSneakers partnership. She says about 15 to 25 people attend the class depending on the time of year.

Ward says her group has come so far that even her grandchildren had trouble keeping up when they attended.

“I have a strong group of people that I push them and they are absolutely receptive and amazing to everything,” Ward said. “So we kind of think out of the box a little bit here, (more) than your normal SilverSneakers class.”

The class centers around chair-based exercises with weights and resistance bands, but Ward proudly said her group does things a little differently.

“You’ll find other SilverSneakers classes that are strictly chair-based,” Ward said. “We avoid the chair as much as possible.”

When asked why she thought this particular group had come so far, she gave all the credit to the individual members.

“They’ve done all the work. I’m just their coach,” Ward said. “I’m just there to play some music and tell a few jokes and make them laugh.”

While Ward bragged about her group, her class members hold her in very high regard, too.

Nancy White, 68, started taking the class not long after Ward began instructing. Since then, White said she only misses it if she’s on vacation, even after having knee replacement surgery. The procedure put White on a hiatus for about two weeks and then she was back at it again.

“Lorrie makes us all feel like we’re at our very best,” White said. “It’s a joy to walk through the door.”

Swanson said she keeps track of what her members are doing in their lives, whether they are going out of town or going to a dental appointment. She has even written personal cards to them.

“It’s just kind of like she’s adopted all these grandparents,” Swanson said.

White said she could tell Ward cared for her and the other members attending the class because she would notice small victories, like picking up an extra pound or two. White said she and Swanson have now worked their way up to 20-pound weights.

She said the class has made it easier to come to the gym, which she said was hard to do at her age, and that she has seen real results.

Overall, though, it’s the community aspect – the “variety of people and their ages and their enthusiasm” – that brought White back again and again.

More Faces of Arizona: His Mexican-American identity guided him into teaching. In Maryvale, he helps students find their own voice

While the 2022 award ended up going to Jen Burgmeier, an instructor who owns her own studio in Pennsylvania, Ward was a top five finalist out of hundreds of nominees, according to Debbie Johnson, senior public relations manager at Tivity Health, the parent company of SilverSneakers.

Ward says she was so surprised she was a finalist that she didn’t believe the phone call she got from Johnson, which she thought had to be a bad joke as it came on April Fool’s Day.

“It shocked me to know that I’ve only been doing this less than a year here and I have that much support from my members,” Ward said. “It was absolutely amazing.”

She joked that she hoped her members didn’t get her mixed up with someone else, but that her group is truly like family to her.

“I love the older population, I love exercise and it just is such a safe and rewarding position to have,” Ward said.

The way Swanson and White described Ward’s instruction style as a judgment-free space filled with laughter, encouragement and good music. That style makes it clear there was no mix-up – Ward’s members truly seem to value her unique technique and, more than anything, her care for each and every person who attends her class.

“It’s a great community with Laurie as the head, and she’s just fun,” White said. “She knows everybody. She encourages everybody. She’s happy to see us all. It’s wonderful to come through the doors here at The Madison.”

Mon Aug 1 , 2022
Christy Turlington showcases her fitness streak with jaw-dropping yoga pose Christy Turlington has never failed to impress her fans with her tremendous physique and magnificent body. In the Friday post, the 53-year-old supermodel took to social media to show off her yoga skills while hitting the beach with family. In […] 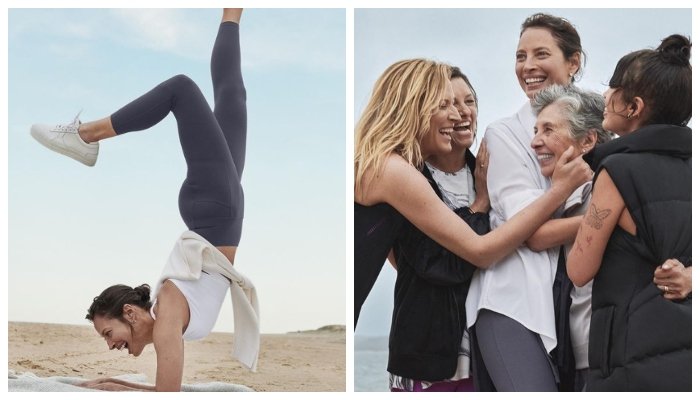