Effective at 5 p.m. Wednesday, Maryland restaurants must reduce indoor dining capacity from 75 percent to 50 percent. A new health advisory urges a 25-person cap on indoor gatherings. The governor also issued a heightened travel advisory that warns against visiting states with high rates of infections, ruling out nonessential travel to 35 states.

The latest restrictions, which have not been in place since Maryland was in Phase 2 of its reopening in the summer, follow a surge in coronavirus cases that prompted leaders of the state’s most populous jurisdictions to ask Hogan to revert to more strict guidelines.

It comes as the rolling seven-day average of new cases across Virginia, Maryland and D.C. stood at 2,833 on Tuesday — a seventh consecutive day with a record high. That’s more than double the region’s average of 1,313 new daily infections on Oct. 1.

Maryland’s new statewide restrictions do not go as far as those reimposed this week in Montgomery County or Baltimore City, where officials hope stricter rules will tamp down the spread of the virus. Contact tracing data shows the majority of infections are linked to small social gatherings or events such as weddings or indoor dining.

Hogan said the 25-person limit will not affect religious organizations, which have been operating under a 250-person cap. The governor also required state workers to telework, except for “public facing” agencies such as the Motor Vehicle Administration.

Hospitals will also be required to submit plans for making space for coronavirus patients, perhaps by sending some to a Baltimore Convention Center field hospital or canceling elective surgeries to reduce inpatient populations. Ted Delbridge, executive director of the Maryland Institution for Emergency Medical Services Systems, said the state is planning for the surge to accelerate and for the worst to hit in December, January and February.

Executive orders take effect this week in Montgomery County and Baltimore City to roll back some restrictions lifted over the summer. Others jurisdictions, including Anne Arundel County, were waiting to see what Hogan would announce Tuesday.

Maryland has allowed local governments to reopen more slowly than the state’s timeline and to retain more restrictive policies, even as Hogan lifts them statewide. But local officials with the state’s six largest jurisdictions have criticized the approach, arguing that a “patchwork” reopening hampers their ability to curb the virus effectively and that Hogan has not included local governments in his pandemic decision-making.

Local leaders in the state have called on the governor to pull Maryland from the third phase of its recovery plan and reimpose certain restrictions on social and commercial activity. Top officials from Baltimore, Frederick, Howard, Montgomery and Prince George’s counties and Baltimore City reiterated their message in a Saturday letter to Hogan, noting it had been 169 days since he had participated in a statewide call with county leaders.

“All of us have thanked you repeatedly for taking these bold steps to save lives in our counties,” they wrote. “But it seems as if the state’s resolve has weakened since we collectively achieved that positive progress in our battle against this virus.”

The letter notes that Maryland’s daily case rate per 100,000 residents recently hit a record high of 14.98, which far exceeds the rate when Hogan imposed a stay-at-home order. In addition, the “stop signs” included in the state’s recovery outline — a sustained increase in hospitalization or community transmission, for example — are “staring us in the face,” the officials said.

“Our residents do not live their lives confined within the borders of our counties,” the letter said. “So our efforts to contain this deadly virus should not either.”

Coronavirus infections in Maryland have spiked in the past week, with seven consecutive days of at least 1,000 new cases. The test positivity rate climbed above 5 percent Monday for the first time since June.

Montgomery lawmakers on Tuesday approved County Executive Marc Elrich’s executive order to limit gatherings to 25 people or fewer and reduce capacity for restaurants and shops from 50 percent to 25 percent. The new rules went into effect at 5 p.m. Tuesday.

Elrich (D) has consistently opted to reopen Montgomery at a slower pace than the state. Given the recent surge in cases statewide, he said Hogan should have done more to curb social and commercial activity, including reducing the capacity for indoor dining to 25 percent and mandating, rather than recommending, that residents limit gatherings to fewer than 25 people.

“There are lots of ‘shoulds’ in here that need to be ‘musts,’ ” Elrich said after Hogan’s news conference. Elrich warned that if current trends in Maryland do not abate, the state or the county could take stronger action.

The seven-day average in D.C. is 93, which is about half the peak level recorded earlier in the pandemic. The city is averaging 95 new cases per 100,000 residents in recent days, below that of each neighboring state.

The rate of new infections in the Washington region continues to hover at about half the U.S. average, with caseloads locally marching upward with those in several states.

A new Baltimore City order that requires masks in indoor and outdoor public spaces goes into effect at 5 p.m. Thursday. Baltimore Mayor Bernard C. “Jack” Young (D) announced last week that the city would be reimposing restrictions on social activity, including limiting the capacity of indoor and outdoor facilities to 25 percent, halting indoor dining at 11 p.m. and prohibiting gatherings of more than 10 people.

In Virginia, Gov. Ralph Northam (D) announced Tuesday a major expansion of testing for the coronavirus but resisted calls to impose new restrictions on residents and businesses.

About 6.2 percent of coronavirus tests in the state are positive, an increase over recent weeks, but far from the 20 percent positivity rate in the spring, Northam said.

“This is concerning because it’s getting colder, the holidays are approaching, and the temptation to meet with friends and family is high,” he said at a news conference.

State officials signed contracts with three new laboratories to provide community testing in areas with severe outbreaks and in congregate settings such as nursing homes. In addition, the state is distributing 200,000 new antigen “quick response” tests bought in a regional pact, with other rapid tests provided by the federal government.

Officials said this will allow the state to test 7,000 more people each day, in addition to the 20,000 residents now tested daily. The tests will go to sites in Blacksburg, Charlottesville and Norfolk.

Northam urged residents to continue limiting their interactions with others, wear masks and wash their hands.

The governor said it’s not the time to toughen enforcement or impose new restrictions. Recent changes in state law will allow civil — not just criminal — penalties for those who don’t comply with the statewide mask order, but Northam said he prefers to emphasize “mitigations” and changing behavior through a marketing campaign.

“It’s not about carrying a stick around, but about carrots,” said Northam, a pediatric neurologist.

Elsewhere in Virginia, Arlington County Health Director Reuben Varghese told County Board members Tuesday that the jurisdiction reached its second-highest level of coronavirus cases this week, trailing only a week in May.

Maryland on Tuesday launched a voluntary contact-tracing application called MD COVID Alert. Residents who set the region on their iPhone or Android smartphone as Maryland will receive a push notification inviting them to receive exposure notification alerts, officials said. The system, which gives users a random ID to track possible exposure, does not collect or share personal information, said Katherine Feldman, director of the state’s contact-tracing unit.

“The system is completely anonymous,” she said.

Ovetta Wiggins contributed to this report.

Tue Nov 17 , 2020
Mass General Brigham is out with a plan to dismantle racism within its 12-hospital network. The project, called “United Against Racism,” includes changes in leadership, culture and patient care. It also expands efforts to address hunger, housing and job opportunities outside hospital walls. “We want this to be a major […] 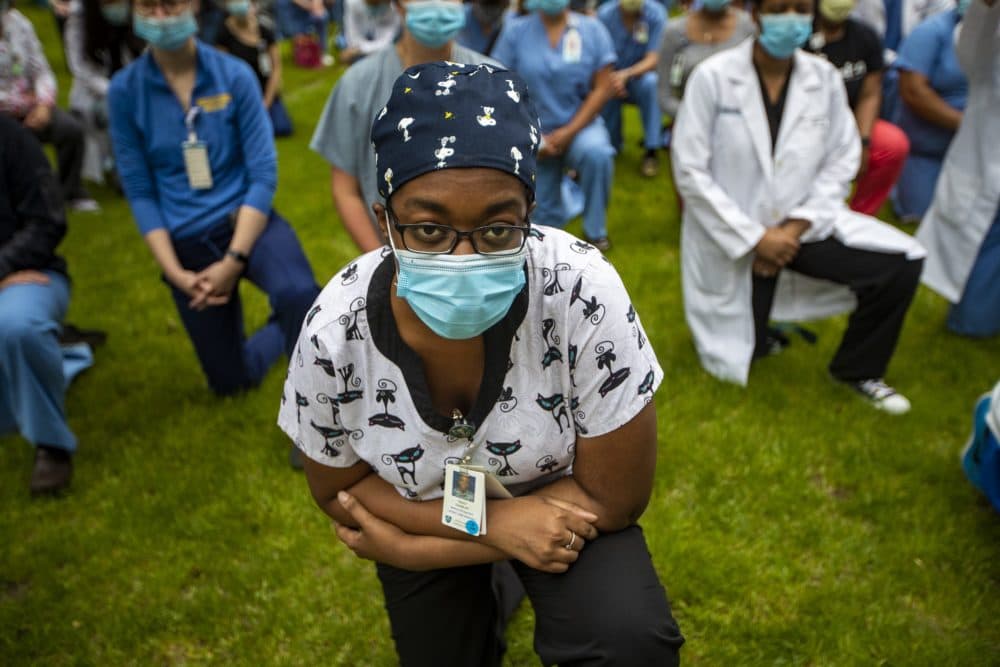