Top Oz aides have mocked Fetterman’s health, diet, and recovery in statements and social media posts, seemingly trying to taunt the lieutenant governor into agreeing to a debate. The mockery, which has been derided by Fetterman and scores of Democrats, has seemingly cleaved Oz’s Senate campaign, with the GOP candidate at one point bizarrely suggesting that his own spokespeople — whom he pays to communicate his message to the public — do not necessarily speak for him.

“I can only speak to what I’m saying,” Oz said in a radio interview this week.

The new approach has shaken up the Pennsylvania contest, something Republicans argue had to happen after Oz’s struggles. But it has also exposed the Republican to questions about personal decency, allowing Fetterman to question what kind of doctor would ridicule a stroke survivor.

The crescendo of the fight came when Fetterman this week declined to attend an early September debate, citing the effects of his stroke and the way the Oz campaign has poked at his recovery. The lack of debates — Fetterman has yet to agree to a single contest — has raised questions about whether he will ever agree to an in-person face-off against Oz, forcing the Democrat to defend the decision.

“When they want to get into a serious conversation and really talk about having a debate, I’d be happy to engage in that,” Fetterman told MSNBC on Wednesday in his first nationally televised interview since the stroke. “But right now, the fact that they have chosen to have a deeply unserious campaign to just ridicule somebody that is just recovering from a stroke.”

Oz’s stepped-up messaging, though, has also changed the subject in a race that just weeks ago was dominated by questions over his wealth, the fact that he until recently lived in New Jersey, and concerns that poor fundraising and months spent on the back foot had done irreparable damage to his chances in November.

“It’s aggressive and I get that people are going to criticize the execution sometimes,” said a Republican working on Senate campaigns. “But it is changing the complexion of the race, which undoubtedly needed to happen.”

All of this has come together to create a chaotic and uncertain week in one of the nation’s highest-profile Senate campaigns at a time when the Commonwealth has been the epicenter of political attention. President Joe Biden visited Wilkes-Barre, Pennsylvania, on Tuesday, delivered a primetime address from Philadelphia on Thursday and plans to campaign in Pittsburgh on Labor Day. Former President Donald Trump will also be in Wilkes-Barre this weekend with plans to rally Republicans.

Oz distances himself from his aides

Republicans’ strategy for closing the gap with Fetterman has been two-fold.

While Oz’s aides are stoking a debate about debates by focusing on Fetterman’s stroke recovery, they are also accusing the lieutenant governor of being soft on crime, with both the Oz campaign and outside groups airing ads attacking Fetterman’s focus on criminal justice reform and lowering the state’s prison population.

“As chairman of the Board of Pardons, Fetterman says he’s trying to get as many criminals out of prison as he can,” said an ad from the Senate Leadership Fund, a GOP super PAC. Fetterman has previously said he supports reducing the state’s prison population by a third.

It is rhetoric coming from Oz’s campaign, however, that has stoked drama within the operation and even among some Republicans.

Oz’s campaign aides have taunted Fetterman over his ongoing recovery, most notably when senior communications adviser Rachel Tripp said in a statement, “If John Fetterman had ever eaten a vegetable in his life, then maybe he wouldn’t have had a major stroke and wouldn’t be in the position of having to lie about it constantly.”

The Fetterman campaign lambasted such comments, calling them out of line and offensive. But the most notable criticism came from Oz, who, in a radio interview this week, suggested he shouldn’t be held accountable for statements from his staff.

“The campaign’s been saying lots of things, both of them, my position is — and I can only speak to what I’m saying — is that John Fetterman should be allowed to recover fully, and I will support his ability, as someone who’s going through a difficult time, to get ready,” Oz said.

Taking a markedly different tone from his campaign, Oz added: “As a physician, I have tremendous empathy for what John Fetterman’s going through. But the arguments that we’ve been making is more around him getting out and answering questions about his radical positions.”

In response, Fetterman senior adviser Rebecca Katz released a statement calling on Oz to either “stand by” his campaign’s attacks or “denounce them.”

“Instead of trying to weasel out of these cynical, heartless, and out of touch statements, let’s hear you defend them — or disavow them straight up,” Katz said.

But if Oz is seeking a softer tone, the message hasn’t been delivered to his aides.

Other campaign statements, including one from Oz communications director Brittany Yanick, asked whether Fetterman was “too sick to debate” or whether he “cannot stand in front of cameras for more than 10 minutes.” And in a somewhat sarcastic bid to get Fetterman to debate, the Oz campaign told reporters they would be willing to “pay for any additional medical personnel he might need to have on standby.”

The focus on Fetterman’s health has put Oz in an awkward position — one evidenced by his radio interview distancing. Before running for Senate or hosting a nationally syndicated television show, Oz was regarded as a talented and driven cardiothoracic surgeon who regularly treated people with strokes. By overseeing a campaign that is mocking a survivor, Oz is threatening to tarnish his own brand with voters he needs to win, Democrats believe.

“Oz is falling into a trap by allowing his campaign to mock Fetterman. … Oz being a doctor, allowing his campaign to basically try and laugh about a person’s medical problems, is really going to boomerang on them,” said Mike Mikus, a Democratic consultant in Pittsburgh who led Katie McGinty through the state’s Democratic Senate primary in 2016 before she lost to Republican Sen. Pat Toomey in the general election. “He’s not running as Mr. Oz. He is running as Dr. Oz.”

Mikus suggested that the biggest damage to Oz’s campaign could be felt in the suburbs, where voters — many of whom are aware of Oz’s television show — could be moved by his persona and are looking for someone who is authentic and trustworthy.

“I understand why he is trying to distance himself from his staff, but he would be better served firing his staff,” Mikus added.

Republicans are less certain of the damage — even if they acknowledge some of the attacks on Fetterman make people uncomfortable.

“Up until the last week of this race, the entire conversation around the race has been about Dr. Oz living in New Jersey, how he is a rich out-of-state guy, how he owns ten houses,” said the Republican operative. “And today we are talking about whether John Fetterman is capable of performing the duties of this job.”

Fetterman’s strategy has been to turn the Oz campaign’s mockery against the former television doctor — something the Democrat attempted to do when he took the stage at an event in Mercer County on Sunday.

“How many of you, maybe yourself, have had a big health challenge in your own life,” Fetterman said in what has now been turned into a campaign video. “Can you even imagine if you had a doctor that was mocking your illness? Or ridiculing that? Well here we are right now.”

He added: “I’d like to think that Dr. Oz may have really lost his way if you’re going to make fun of somebody who had a stroke. But I don’t think he really had his way, since this is guy who made a career selling ‘miracle diet pills.'”

Democrats, including Fetterman’s campaign, believe Oz is overstepping and overestimating how much voters care about a debate over debates.

“Oz has misdiagnosed this moment: His comments are offensive to general election voters, he’s clumsily tripping over himself by attempting to disavow his own spokesperson — and in the meantime, today Pennsylvanians are reading on the front page of the Inquirer that he thinks abortion is a crime,” said David Bergstein, spokesman for the Democratic Senatorial Campaign Committee.

Outlets, including CNN, reported this week that Oz said during the GOP primary that abortion is “still murder” early in a pregnancy since “life starts at conception,” a statement that would have sweeping policy implications on an issue that has invigorated Democrats this cycle.

“John Fetterman is healthy. He is sharp. He is funny. He is on it,” she said. “Separately, there is still this issue with auditory processing. These are two different things.”

Oz’s campaign, however, also accused Fetterman of lying about his health. “What we are criticizing is him lying,” said Barney Keller, an Oz spokesperson. The Fetterman campaign has denied that, pointing to interviews he has done in which he has described the lingering issues caused by his stroke.

But Fetterman’s campaign was mum about details of the stroke while he was in the hospital, and while one of his personal doctors released a letter describing his condition and the candidate has been talking about his recovery for weeks, none of the doctors who performed the surgery on him have provided details about the procedure or their prognosis.

Dr. Jonathan Reiner, a CNN medical analyst and interventional cardiologist who has treated several high-profile politicians, said that lack of information at first has allowed the Oz campaign and others to question Fetterman’s condition.

“The big issue is this: It is one thing to have an issue with articulating clearly and crisply, it’s another thing entirely to have cognitive issues,” he said. “I think many people would have no problem electing a leader who thinks crisply but occasionally stumbles on a word. We have that person as president. The concern that people can have is: does he have any residual cognitive deficit.”

Reiner said, based on his knowledge of strokes and watching Fetterman recently, that he thinks the candidate most likely has “residual speech, not cognitive” issues. But “the paucity of information that came out of the campaign in the months following his near fatal event is striking.”

As for a doctor’s campaign mocking a stroke survivor, Reiner was unequivocal: “As a surgeon, whose complications include stroke, to be dismissive of the effects of a stroke is disgraceful. Would he be that dismissive of a person who has a stroke following a bypass operation? To mock him, that’s contemptible.”

Wed Sep 7 , 2022
NORFOLK, Va. – Norfolk police say two are dead and five others injured following a mass shooting in the Highland Park section of the city near Old Dominion University. According to police, officers were called to a home on Killam Ave. near 50th St. around midnight Sunday for a shooting. […] 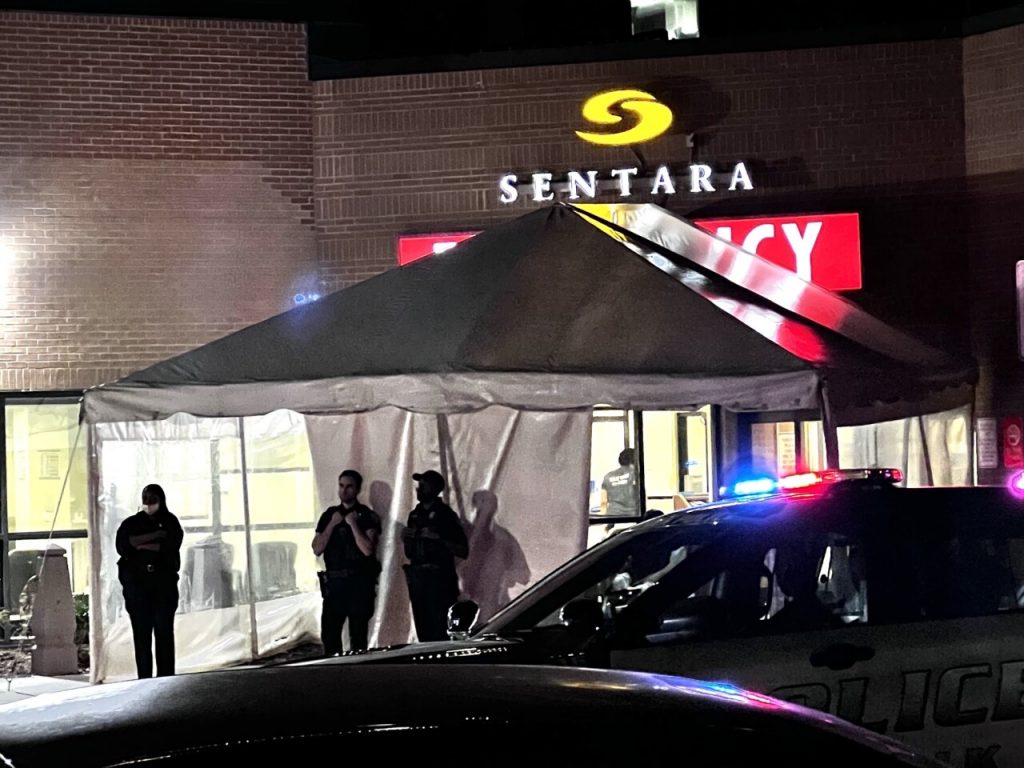