A wealthy Pennsylvania dentist who faces the death penalty for murdering his wife on safari to claim her $4.8million life insurance admitted to his mistress on a prison phone call: ‘I’m a dead man.’

Lawrence ‘Larry’ Rudolph, 67, was found guilty in August of blasting his wife Bianca in the heart with a shotgun in Zambia in 2016, then fraudulently claiming $4.8million in life insurance payouts to build a new life with his mistress Lori Milliron.

The killer is awaiting to hear if he faces a life sentence but in a newly-released phone call with Milliron, he acknowledged he will die in prison.

Milliron, who was also convicted for providing false and misleading testimony to a grand jury’ about the money and the nature of her relationship with Rudolph, is now living in their nearly completed custom-built mansion in Paradise Valley, Arizona. 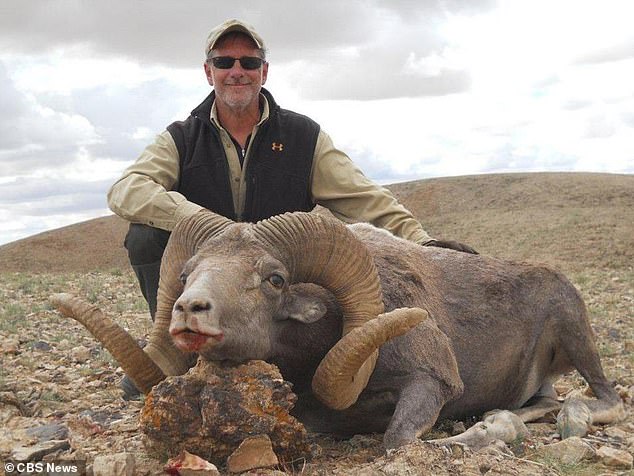 Lawrence ‘Larry’ Rudolph, 67,  is facing the death penalty for murdering his wife Bianca on safari in 2016

She told Rudolph in the intercepted phone call obtained by NBC’s Dateline: ‘I didn’t expect at 65 years old that I was gonna have to have a new career.’

The convict replied: ‘You should look for a new boyfriend, while you can.’~

But she answered back: ‘Honey, I’m a convicted felon, that’s appealing…’

Rudolph then said: ‘Well I just wanted to tell you I love you.’

Milliron replied: ‘Take care of yourself. Never, never give up. Please.’

But he admitted: ‘It’s not about giving up, Lori. It’s just about facing reality. I’m a dead man.

‘I’m gonna die in prison. And I don’t want to take you with me, or anybody else. It’s not fair.’ 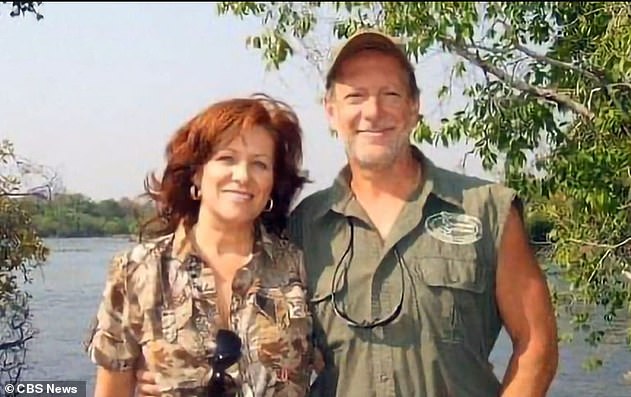 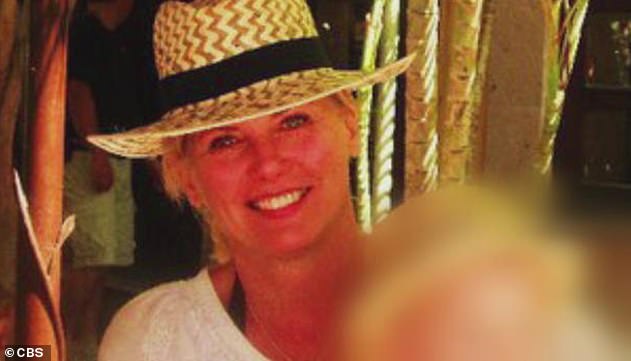 Prosecutors alleged Rudolph killed his wife of 34 years to be with his girlfriend, Lori Milliron (pictured)

A three-week long trial was held in Denver, Colorado, in the summer, where Rudolph was found guilty of murder and mail fraud.

A jury of six men and six women sided with prosecutors – who believed the dentist pre-planned to killed his wife of 34 years in cold blood to begin a new life with Milliron.

Milliron was found guilty by the same jury of being an accessory after the fact to murder, obstruction of a grand jury and two counts of perjury before a grand jury.

She was found not guilty on three other counts of perjury.

Rudolph maintained his innocence and the two adult children he had with his wife sat in court to support him during the trial. Markus said they would appeal his conviction. 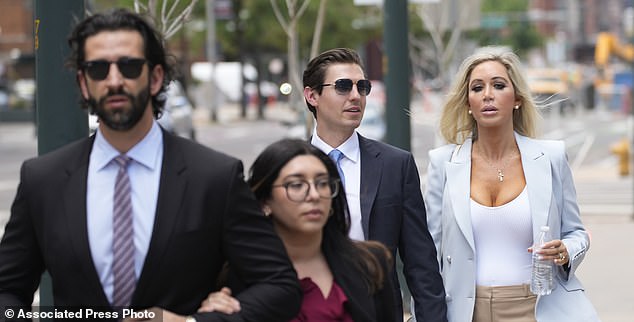 FILE – The son, left, and daughter, back right, of Pittsburgh dentist Lawrence ‘Larry’ Rudolph head into federal court for the afternoon session of the trial, July 13, 2022, in Denver

Bianca died after being shot by a Browning shotgun in their cabin while she was packing up as they were set to leave Zambia and start their journey home to the US.

At around 5am on October 11 in 2016, gamekeepers and scouts heard a gunshot coming from their cabin.

When they got there, they found Bianca lying on the ground with a gunshot wound to the chest.

Rudolph’s defense team had argued that federal prosecutors Bianca may have accidentally shot herself.

But prosecutors alleged Rudolph killed his wife to be with Milliron, who had been the dentist’s mistress for 20 years.

Rudolph said he’d been in an open marriage with his late wife Bianca from the year 2000, until he shot her dead in October 2016. 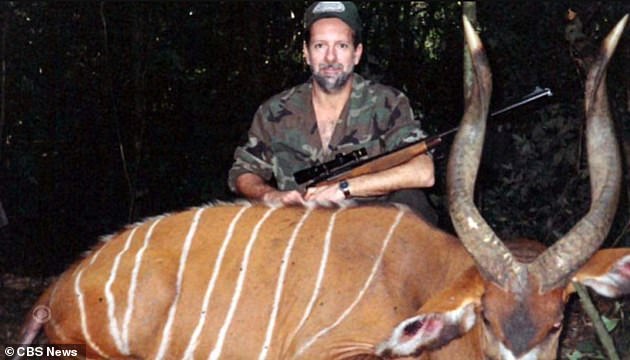 Rudolph claimed an unfamiliar shotgun he and Bianca brought with them to hunt a leopard accidentally went off, wounding her as she hurried to pack 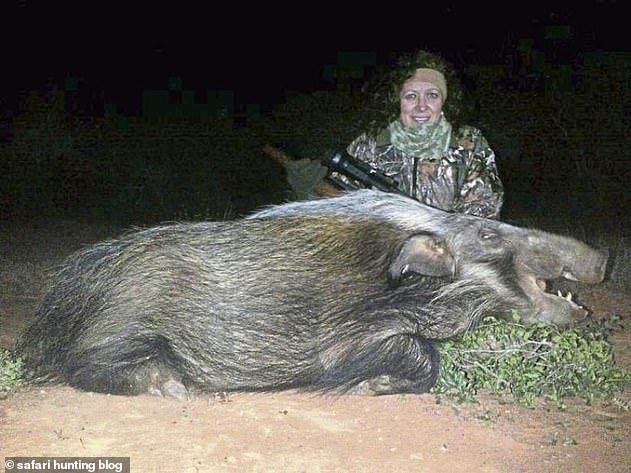 Despite martial problems, Rudolph said he and his wife, with whom shared two children, agreed to stay married but were free to pursue sexual relationships with other people

Rudolph was charged in December 2021 for the murder.

The 67-year-old said he was in the bathroom when he heard his wife say ‘come here and help me’ before hearing the shot and finding his wife on the floor bleeding.

In opening statements, the prosecution told jurors that Rudolph was overheard blurting out: ‘I killed my f***ing wife for you!’ during an argument with Milliron at a Phoenix steakhouse in 2020, after he learned that the FBI was investigating his wife’s death.

He said he and Milliron were having an argument about their finances and how the COVID-19 pandemic, then at its start, would affect the Pennsylvania dental franchise that had made him a small fortune.

But he was irritated because he said his top concern was the FBI’s probe. 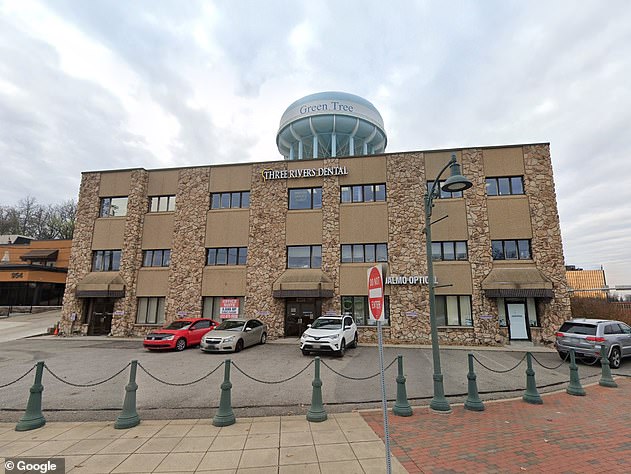 Rudolph said what he actually said was ‘Now they’re saying I killed my f***ing wife for you.’

Despite marital issues and twice being close to divorce, Rudolph said he and his wife, with whom he had two children, agreed to stay married but were free to pursue sexual relationships with other people.

Rudolph said neither Milliron nor his wife issued him any ultimatums about ending his relationship with the other.

Rudolph’s lawyer, David Markus, argued that Rudolph had no financial motive for murder, being worth more than $15 million when his wife died, and said the insurance payout went into a trust for their children.

Zambian authorities determined two days after the October 11, 2016, shooting that it was accidental, according to the defense. Investigators for the insurers who later paid $4.8 million reached the same conclusion.

Prosecutors counter that evidence shows Bianca Rudolph’s wounds came from a shot fired from 2 to 3.5 feet away, and say the barrel of the gun was too long for her to have shot herself.

A jury found him guilty and he awaits his sentencing.