Roswell Park Comprehensive Cancer Center officials have a lot to be happy about.

The cancer center posted solid operating results for the pandemic’s second year, seeing more patients than it did two years ago and managing to log a net surplus of $35.5 million on a record $1.12 billion in revenues for the fiscal year ended March 31.

Roswell, however, also recently got some news that, perhaps, bruised its ego: Roswell Park fell out of the Top 50 cancer hospitals as ranked by U.S. News & World Report.

The 2022-23 rankings labeled Roswell as “high performing in cancer,” but did not assign the cancer center a numbered ranking.

“Together, we’ve achieved recognitions few other centers have,” Johnson said. “We’re proud of our record of achievement and of consistently exceptional care.”

U.S. News lists the cancer hospitals by an overall score, but only assigns rankings to the Top 50.

The No. 1 cancer hospital was University of Texas MD Anderson Cancer Center, which received a perfect score of 100, while second-ranked Memorial Sloan Kettering Cancer Center in New York City received an 85.7.

The 50th-ranked cancer hospital was Lenox Hill Hospital at Northwell Health in New York City, which received a score of 54.1.

Roswell wasn’t too far behind, with an overall score of 48.9.

Roswell also wasn’t the only cancer center to fall out of the Top 50 this year.

U.S. News & World Report, which has published hospital rankings annually since 1990, evaluates hospitals in more than 30 medical and surgical services.

The group also ranks hospitals by 15 adult specialties, such as cancer, cardiology and heart surgery, and neurology and neurosurgery.

Larry Zielinski, a health care administration expert at University at Buffalo and a former Buffalo General Medical Center president, said the U.S. News cancer hospital rankings take into account topics such as nurse staffing and outcome-based data such as patient survival rates and discharging patients to their homes. The rankings, he said, also still rely on a more subjective physician survey and the Hospital Consumer Assessment of Healthcare Providers and Systems patient satisfaction surveys.

Experts have long advised patients to use the hospital rankings as a starting point to make health care decisions. While the U.S. News & World Report rankings are just one of many, hospitals zone in on the rankings and – when things go well – use them to recruit physicians and to market to patients.

In other words, it’s a love-hate relationship.

“In sum, every hospital wants to be in the top of these surveys, and trumpets their results when they are,” Zielinski said. “When they aren’t, they are, of course, downplayed. I think they have a role in educating patients, particularly those focused on objective measures and outcomes.”

As Zielinski notes, a hospital that does well issues a news release, seizing a marketing opportunity.

That’s what Kaleida Health did the day the rankings came out on July 26.

Welcome to Buffalo Next. This newsletter from The Buffalo News will bring you the latest coverage on the changing Buffalo Niagara economy – from real estate to health care to startups. Read more at BuffaloNext.com.

Was this email forwarded to you? Sign up to get the latest in your inbox five days a week.

Part of the reason a labor deal has been difficult to reach at Kaleida? A health system with ‘fragile’ finances and burned-out employees.

But Kaleida and the unions agree on one thing: WNY hospitals need more state funding.

An Amherst car dealer is looking to expand its service department, among other development projects in the suburbs.

It’s that time of the year: Health insurance rates are going up for WNY small businesses and people.

Two of Buffalo’s small private colleges are flirting with an eventual merger.

Amid Starbucks’ union boom, the Cheektowaga store won’t unionize after all.

A third warehouse is in the works for the former Bethlehem Steel site in Lackawanna.

Environmental cleanup costs are driving up the price of a North Tonawanda apartment project.

Five reads from Buffalo Next:

1. ‘Cancer didn’t stop during Covid’: Roswell Park’s patient volume in its last fiscal year exceeded its pre-pandemic totals two years ago. That, coupled with full restoration of operating support from New York, led to a surplus.

2. Why are car washes popping up all over the Buffalo Niagara region? There’s a gusher of money from deep-pocketed investors that’s helping regional and national chains expand into new markets, while mom-and-pop operators also are trying to cash in.

3. The local housing market is still going strong, although it has started to show signs that it is cooling down from its red-hot status of last year.

4. At Moog, a homegrown company takes off: With good-paying jobs, strong customer connections and technical expertise, Moog’s operations are the type of manufacturing that the region’s business recruiters are eager for more of.

5. Rich Products relies on innovation and new products to keep its business growing – and a good portion of those efforts are based in Buffalo.

The Buffalo Next team gives you the big picture on the region’s economic revitalization. Email tips to [email protected] or reach Deputy Business Editor David Robinson at 716-849-4435.

Must-read local business coverage that exposes the trends, connects the dots and contextualizes the impact to Buffalo’s economy.

Wed Aug 24 , 2022
The self-named “Health Freedom Slate,” a conservative effort to govern the Sarasota Memorial Hospital Board with a far-right hand, lagged in an outright win, gaining three seats out of the four candidates running.  Patricia Maraia, a registered nurse, led early votes by a mere percentage point for Seat 1 for the […] 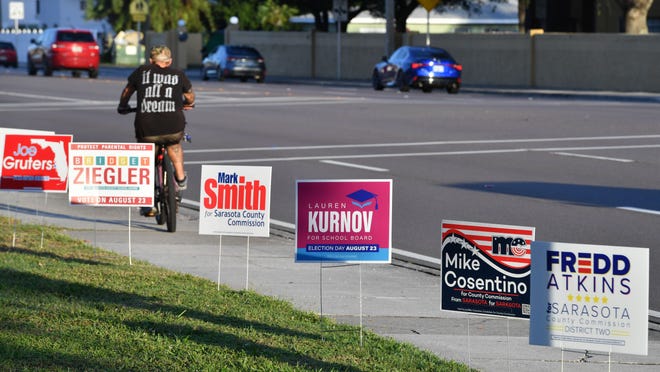