SARS-CoV-2, the causative agent of COVID-19, spreads efficiently, with a basic reproductive number of 2.2 to 2.5 determined in Wuhan1,2. The effectiveness of control measures depends on several key epidemiological parameters (Fig. 1a), including the serial interval (duration between symptom onsets of successive cases in a transmission chain) and the […]

SARS-CoV-2, the causative agent of COVID-19, spreads efficiently, with a basic reproductive number of 2.2 to 2.5 determined in Wuhan1,2. The effectiveness of control measures depends on several key epidemiological parameters (Fig. 1a), including the serial interval (duration between symptom onsets of successive cases in a transmission chain) and the incubation period (time between infection and onset of symptoms). Variation between individuals and transmission chains is summarized by the incubation period distribution and the serial interval distribution, respectively. If the observed mean serial interval is shorter than the observed mean incubation period, this indicates that a significant portion of transmission may have occurred before infected persons have developed symptoms. Significant presymptomatic transmission would probably reduce the effectiveness of control measures that are initiated by symptom onset, such as isolation, contact tracing and enhanced hygiene or use of face masks for symptomatic persons.

SARS (severe acute respiratory syndrome) was notable, because infectiousness increased around 7–10 days after symptom onset3,4. Onward transmission can be substantially reduced by containment measures such as isolation and quarantine (Fig. 1a)5. In contrast, influenza is characterized by increased infectiousness shortly around or even before symptom onset6.

In this study, we compared clinical data on virus shedding with separate epidemiologic data on incubation periods and serial intervals between cases in transmission chains, to draw inferences on infectiousness profiles.

Among 94 patients with laboratory-confirmed COVID-19 admitted to Guangzhou Eighth People’s Hospital, 47/94 (50%) were male, the median age was 47 years and 61/93 (66%) were moderately ill (with fever and/or respiratory symptoms and radiographic evidence of pneumonia), but none were classified as ‘severe’ or ‘critical’ on hospital admission (Supplementary Table 1).

A total of 414 throat swabs were collected from these 94 patients, from symptom onset up to 32 days after onset. We detected high viral loads soon after symptom onset, which then gradually decreased towards the detection limit at about day 21. There was no obvious difference in viral loads across sex, age groups and disease severity (Fig. 2).

Separately, based on 77 transmission pairs obtained from publicly available sources within and outside mainland China (Fig. 1b and Supplementary Table 2), the serial interval was estimated to have a mean of 5.8 days (95% confidence interval (CI), 4.8–6.8 days) and a median of 5.2 days (95% CI, 4.1–6.4 days) based on a fitted gamma distribution, with 7.6% negative serial intervals (Fig. 1c). Assuming an incubation period distribution of mean 5.2 days from a separate study of early COVID-19 cases1, we inferred that infectiousness started from 2.3 days (95% CI, 0.8–3.0 days) before symptom onset and peaked at 0.7 days (95% CI, −0.2–2.0 days) before symptom onset (Fig. 1c). The estimated proportion of presymptomatic transmission (area under the curve) was 44% (95% CI, 25–69%). Infectiousness was estimated to decline quickly within 7 days. Viral load data were not used in the estimation but showed a similar monotonic decreasing pattern.

Finally, simulation showed that the proportion of short serial intervals (for example, <2 days) would be larger if infectiousness were assumed to start before symptom onset (Extended Data Fig. 2). Given the 7.6% negative serial intervals estimated from the infector–infectee paired data, start of infectiousness at least 2 days before onset and peak infectiousness at 2 days before to 1 day after onset would be most consistent with this observed proportion (Extended Data Fig. 3).

Our analysis suggests that viral shedding may begin 2 to 3 days before the appearance of the first symptoms. After symptom onset, viral loads decreased monotonically, consistent with two recent studies8,9. Another study from Wuhan reported that virus was detected for a median of 20 days (up to 37 days among survivors) after symptom onset10, but infectiousness may decline significantly 8 days after symptom onset, as live virus could no longer be cultured (according to Wölfel and colleagues11). Together, these results support our findings that the infectiousness profile may more closely resemble that of influenza than of SARS (Fig. 1a), although we did not have data on viral shedding before symptom onset6,12. Our results are also supported by reports of asymptomatic and presymptomatic transmission13,14.

For a reproductive number of 2.5 (ref. 2), contact tracing and isolation alone are less likely to be successful if more than 30% of transmission occurred before symptom onset, unless >90% of the contacts can be traced15. This is more likely achievable if the definition of contacts covers 2 to 3 days prior to symptom onset of the index case, as has been done in Hong Kong and mainland China since late February. Even when the control strategy is shifting away from containment to mitigation, contact tracing would still be an important measure, such as when there are super-spreading events that may occur in high-risk settings including nursing homes or hospitals. With a substantial proportion of presymptomatic transmission, measures such as enhanced personal hygiene and social distancing for all would likely be the key instruments for community disease control.

Our study has several limitations. First, symptom onset relies on patient recall after confirmation of COVID-19. The potential recall bias would probably have tended toward the direction of under-ascertainment, that is, delay in recognizing first symptoms. As long as these biases did not differ systematically between infector and infectee, the serial interval estimate would not be substantially affected. However, the incubation period would have been overestimated, and thus the proportion of presymptomatic transmission artifactually inflated. Second, shorter serial intervals than those reported here have been reported, but such estimates lengthened when restricted to infector–infectee pairs with more certain transmission links16. Finally, the viral shedding dynamics were based on data for patients who received treatment according to nationally promulgated protocols, including combinations of antivirals, antibiotics, corticosteroids, immunomodulatory agents and Chinese medicine preparations, which could have modified the shedding dynamical patterns.

In conclusion, we have estimated that viral shedding of patients with laboratory-confirmed COVID-19 peaked on or before symptom onset, and a substantial proportion of transmission probably occurred before first symptoms in the index case. More inclusive criteria for contact tracing to capture potential transmission events 2 to 3 days before symptom onset should be urgently considered for effective control of the outbreak.

Fri May 1 , 2020
Oral health can be a concern for people who are sheltering at home. Dentistry is defined by close contact with patients, and distancing in the era of COVID-19 poses new challenges. From the air down to the water, a local doctor is bringing high tech infection control to his neighborhood […] 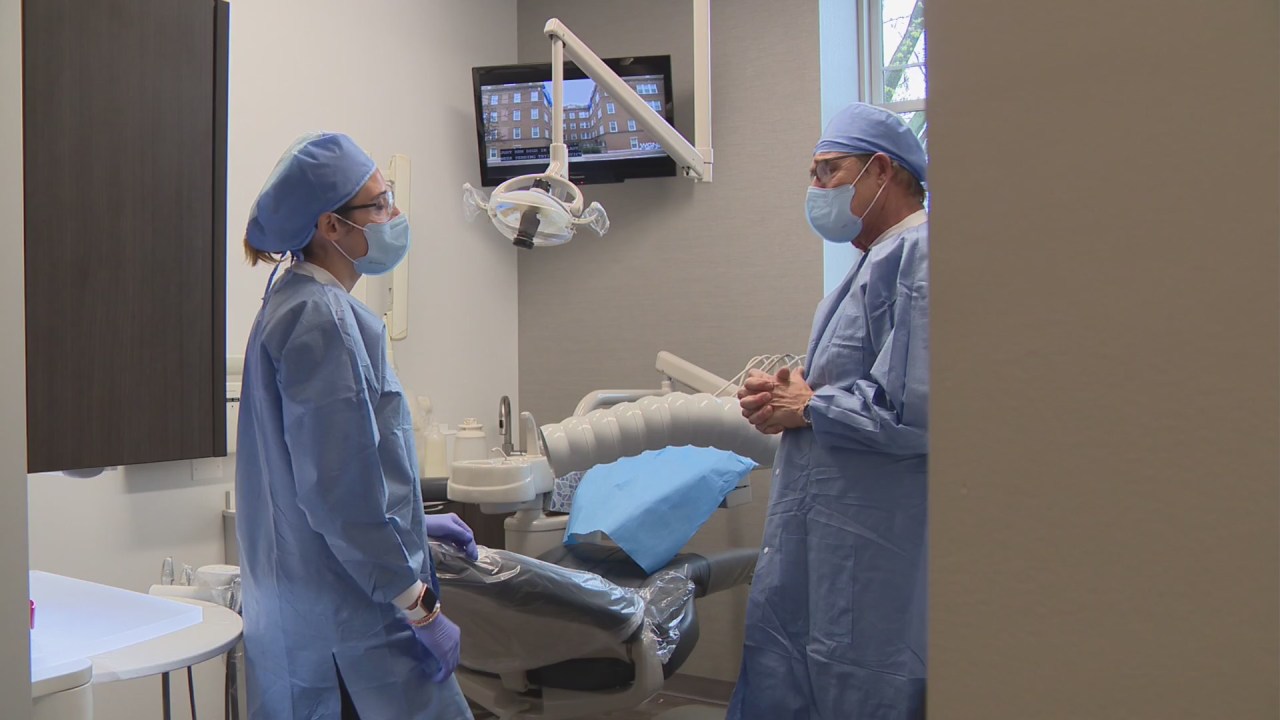