When people think of ‘alternative’ medicine, they often associate it with charlatans, quacks and pseudoscience.

But research suggests some remedies once written off as bunk may in fact help treat a range of conditions, from pain to depression, and even cancer.

Last week, a US study claimed to show for the first time that mindfulness meditation can act as a painkiller, dampening responses in the brain responsible for aches.

It followed major research in March that found a supplement made from shellfish had ‘anti-cancer benefits’. In the study of 400,000 people, there was a 16 per cent lower risk of lung cancer in those who took the tablets regularly.

And research spanning decades has indicated the flower St John’s wort can be as effective as antidepressants in people with mild or moderate depression.

Such research has convinced even the staunchest of critics there may be a place for alternative medicine in the way we treat modern disease.

Professor Edzard Ernst, chair of complementary medicine at the University of Exeter, has made a career out of  calling out treatments with no scientific backing.

He recently authored the book Charles: The Alternative Prince, in which he denounced the Prince of Wales’ obsession with homeopathy.

But he has admitted not all alternative medicine should be tarred with the same brush, and is keeping his eye on five of the most promising treatments in the field: 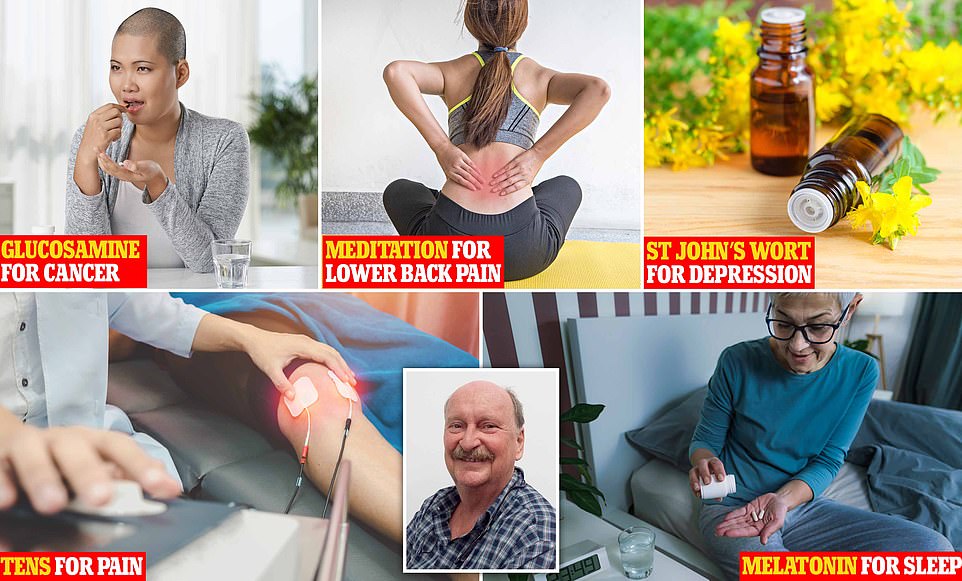 Around 4.5 per cent of Britons are thought to be clinically depressed, according to some estimates, up by a fifth since the turn of the century.

NHS doctors currently prescribe cognitive behavioural therapy or antidepressants. But the latter can cause a range of side effects, including headaches, nausea and problems sleeping, leading some to seek alternatives.

St John’s wort is a flower that has long been used to treat mental health problems. It is one of the best-researched herbal remedies and is taken as a daily capsule, costing around 25p per pill.

There is good evidence that St John’s wort may reduce symptoms in people with mild-to-moderate, but not major depression. In many studies it seems to work as well as selective serotonin reuptake inhibitors (SSRIs), a popular type of antidepressant often prescribed to treat depression.

Trendy mindfulness meditation could be used as a painkiller, a study suggests.

The practice involves ‘being present’ with your thoughts and feelings, normally using breathing techniques.

It is said to help people feel less distressed when they face stressful emotional situations, but now scientists say they have proven for the first time it can also treat physical pain.

They put around 30 healthy Americans through an eight-week mindfulness course and then compared them to a control group.

Participants were given a brain scan before and after the course while their limbs were exposed to heat to establish a pain response.

Those who practiced mindfulness showed less activity in regions of the brain responsible for soreness compared to the control group.

A separate experiment on long-term mindfulness followers indicated they had physical changes to their brains that influenced their perception of pain.

Researchers from the University of Wisconsin claim the results suggest mindfulness could be used instead of opioids or other painkillers for people with chronic aches.

Practicing mindfulness is on the rise, particularly in the US, with some studies estimating 5.7million Americans have tried it at least once.

The latest paper was done by researchers at the RAND Corporation in Santa Monica, California — a non-profit thinktank that produces research to the US Air Force.

The meta-analysis, published in Systematic Reviews in 2016, looked at 35 studies including 6,993 patients who were either given the herbal remedy, a placebo or antidepressants.

They found people taking St John’s wort was as effective as antidepressants, while causing a third less side effects. It was also 53 per cent more effective than taking a placebo.

The authors wrote: ‘[St John’s wort] monotherapy for mild and moderate depression is superior to placebo in improving depression symptoms and not significantly different from antidepressant medication.

‘Adverse events reported in RCTs were comparable to placebo and fewer compared with antidepressants.’

Professor Ernst said: ‘This is most encouraging, but one must nevertheless caution.

‘St John’s wort powerfully interacts with about 50 per cent of all prescription drugs and thus can cause considerable harm.’

Knee pain, period cramps and endometriosis flare-ups could be aided by a special treatment that zaps the body with electricity, according to Professor Ernst.

Using electricity for pain relief was first reported by the Romans, with Emperor Claudius’s court physician noting standing on electric fish on the beach reduced his pain in 63 AD.

The first modern TENS machine was patented in the US in 1974, initially used for chronic pain, although it has since been broadened for a variety of aches.

Professor Ernst told MailOnline: ‘Put simply, it consists of a little battery-driven generator of a low voltage electrical current that connects to electrodes which the patients attaches over the area of pain.

‘It is believed that the electric current stimulates nerve cells that block the transmission of pain signals, modifying the perception of pain.’

The NHS currently recommends people considering TENS speak to their GP, who could refer them to a physiotherapist or pain clinic for the treatment.

But it states ‘there’s not enough good-quality scientific evidence to say for sure whether TENS is a reliable method of pain relief’.

However, Professor Ernst pointed to a review published in February of 381 trials with a total of more than 24,500 participants.

Published in BMJ Open, it found there was ‘moderate-certainty evidence that pain intensity is lower during or immediately after TENS compared with placebo and without serious adverse events’.

Another treatment that has long been touted by alternative medicine enthusiasts is glucosamine.

Glucosamine is found naturally in the body in cartilage, a tough tissue which helps cushion our joints. Other natural sources include the ends of chicken bones and crustacean shells.

They are sold as supplements for as little as 20p a pill.

Over the years, studies have failed to show definitively if the tablets can treat pain on a wide scale. But they are considered generally safe and many osteoarthritis report feeling some pain relief.

NHS GPs no longer prescribe it to arthritis patients due to a lack of concrete research.

But new research in March linked the pills with a lower risk of cancer.

The study of nearly 440,000 middle-aged adults published in the European Respiratory Journal found the pills had ‘anti-cancer benefits’.

Researchers found the 82,600 participants who said they ‘regularly’ took the pills had a 16 per cent lower risk of developing lung cancer over the 11-year study period. They were also 12 per cent less likely to die from the disease.

However, the research did not go as far as to prove the pills were causing the lower risk, with other factors potentially at play.

Other studies have linked the use of glucosamine with a lower risk of heart disease.

The supplement is thought to have anti-inflammatory properties, which could help reduce the risk of cancer and arteries becoming clogged up — by allowing the immune system to function at full capacity.

Professor Ernst said: ‘Even though this is only the latest of a series of studies all showing similar things, population studies cannot conclusively establish a causal effect. Clinical trials are now needed to do just that.’

Meditation for lower back pain

Chronic lower back pain is an increasingly common problem in the modern world, with many of us suffering from being hunched over desks all day.

But the solution could be found in ancient practice in the form of meditation, Professor Ernst suggested.

Meditation was first recorded in Hinduism’s earliest scripts, which were written in around 1500 BC, and can be traced as far back as 5000 BC.

The practice involves focusing the mind on a particular object, thought or activity, to increase attention and achieve a calm and clear mental state.

It has since been adopted in the West as part of mindfulness, with research showing it to be beneficial for a range of mental and medical disorders, including high blood pressure.

A study published in Pain Medicine in February has suggested meditation could help people suffering with lower back pain.

Researchers from Taipei Medical University in Taiwan reviewed 12 trials including a total of more than 1,150 patients.

It found people who meditated had significantly reduced back pain after starting the practice compared to those who did not.

Meditation is thought to relieve pain by altering the structure of the brain, making the feeling less intense.

Professor Ernst said the review suggested meditation could be beneficial for people living in pain.

He said: ‘This is encouraging because, unlike chiropractic, meditation is not associated with serious adverse effects.’

A study published last week put around 30 healthy Americans through an eight-week mindfulness course and then compared them to a control group.

Participants were given a brain scan before and after the course while their limbs were exposed to heat to establish a pain response.

Those who practiced mindfulness showed less activity in regions of the brain responsible for soreness compared to the control group.

A separate experiment on long-term mindfulness followers indicated they had physical changes to their brains that influenced their perception of pain.

Professor Ernst’s final top tip for alternative medicines could hold the key to getting a good night’s sleep.

Melatonin is a hormone that is produced during the night that is thought to help control sleep patterns.

It naturally occurs in the pineal gland in the brain, but a manmade version can also be taken in pills, which cost up to £7 for 60.

He said: ‘It is often advocated for sleep problems but many experts doubt that it truly works.’

But a systematic review published in the Journal of Neurology in January has shown the treatment might hold some promise after all, he said.

The paper by Tehran University of Medical Sciences in Iran looked at 23 studies with people taking melatonin for sleep.

The pills were found to have a ‘significant effect on sleep quality’ in those who took it.

The authors said: ‘The treatment with exogenous melatonin has positive effects on sleep quality.’

Professor Ernst added: ‘There is also some encouraging evidence to suggest that melatonin might have a range of positive effects in cancer palliation.’

However, since MailOnline’s interview with Professor Ernst, a study found sustained use could lead to an unknown array of serious health issues including grave cognitive decline and psychiatric problems in the long-term.

In a report published in the journal JAMA, sleep and psychiatric experts warned that Americans ‘self-medicating’ with high doses over a long-term period are putting themselves at risk of short-term side-effects including fatigue, dizziness and headaches – and more serious health consequences in the long-term, especially if taken in conjunction with other medications.

Mon Aug 1 , 2022
It happened kind of by accident. Elizabeth Eubank’s grandfather planted a sweet cherry tree on the family farm in River Falls, Wis. back in 1952. “And the first year it went really well,” Eubank said. “The second year there was nothing.” The third year, a sapling shot up from the […] 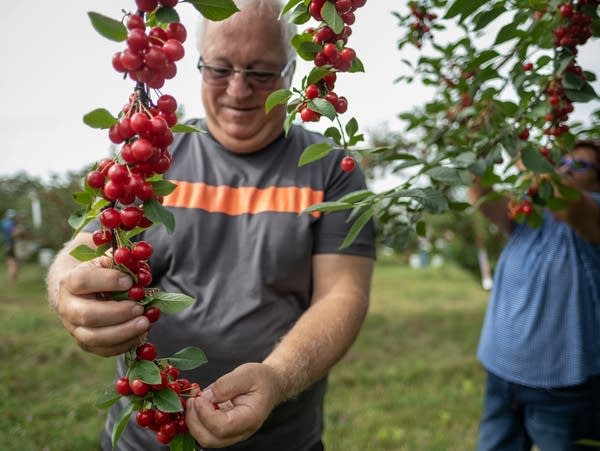