This article is reproduced with permission from Scientific American. It was first published on November 19, 2020. Find the original story here.

Both Pfizer and Moderna use the same genetically engineered vaccine approach, which involves messenger RNA molecules. Assuming the U.S. Food and Drug Administration authorizes the vaccines for “emergency use,” each firm will have to ramp up production and distribution tremendously. Pfizer expects to produce up to 50 million doses worldwide in 2020 and up to 1.3 billion in 2021. Moderna intends to manufacture approximately 20 million doses in 2020 and 500 million to one billion in 2021. A person receiving either vaccine will need two doses, administered three or four weeks apart.

Multiple steps are needed to deliver so many little glass vials of vaccine to local hospitals and pharmacies, where the medication can be injected into a person’s arm. Moderna’s vaccine has to be shipped at –20 degrees Celsius (–4 degrees Fahrenheit), and it can then be stored at that temperature for six months. Once thawed and kept in a refrigerator between two and eight degrees C (36 to 46 degrees F) it is good for up to 30 days. Pfizer’s vaccine must be kept at –70 degrees C (–94 degrees F) — a much greater challenge. Once transferred to a refrigerator, it must be administered within five days.

In the U.S., Moderna will manufacture its vaccine in New Hampshire, Pennsylvania and Indiana. It will ship vials to McKesson Corporation’s distribution center in Irving, Tex., the hub of the federal government’s Operation Warp Speed vaccination initiative. Moderna also plans to manufacture the intervention in Switzerland and Spain. Pfizer will make its U.S. vaccine in Kalamazoo, Mich. It is not distributing through Operation Warp Speed, so it will ship large thermal boxes of filled vials, jammed with dry ice, via companies such as UPS and FedEx to locations around the country. Pfizer also has a production site in BelgiumOn November 16 the company launched a pilot program to test its delivery plan to four states: Rhode Island, Tennessee, Texas and New Mexico.

The system for distributing products (including meat and chemicals) at low temperatures is known as the “cold chain.” What will it take for this network to successfully disperse massive numbers of vials? How is vaccine safely preserved? How many facilities can even handle the challenge, and how will that affect who gets vaccinated and when? Scientific American asked Julie Swann, a professor and head of the department of industrial and systems engineering at North Carolina State University, to reveal the details. Swann specializes in health care supply chains, and she was on loan to the U.S. Centers for Disease Control and Prevention during the emergency response to the 2009 H1N1 swine flu pandemic.

[An edited transcript of the interview follows.]

Moderna’s shipping temperature will be –20 degrees C. Is that typical for frozen products? And is Pfizer’s temperature of –70 degrees C extreme?

There are different cold chains. The ultralow chain, the deep freeze, is the one at –70 degrees C. There’s the “frozen” chain, at –20 degrees C, which is more like a regular freezer. And then [there is] the refrigerated chain: Many vaccines, like flu vaccines, are refrigerated between two and eight degrees C. Only a couple have to be frozen to –20 C, such as [those for] varicella and zoster. The Ebola vaccine did have an ultracold supply chain. Some animal vaccines, like vaccines for chickens, are kept ultracold, too.

What kind of facilities can handle –70 degrees C?

Not that many. Large universities certainly have such storage in their research labs, and some large hospitals [do] — but not the average physician’s office or pharmacy. Pharmacy chain distribution centers may have that storage — the “sub-80 freezers” [boxes that can refrigerate down to –86 degrees C]. So they could possibly send vaccines from there to their retail stores, all of which will have preplanned who is going to get vaccinated.

The vaccines don’t have to stay frozen right up to the time of inoculation.

The CDC has a playbook for states, publicly available, that lays out what you can do with vaccine type A or vaccine type B. It says once a facility receives a thermal shipper [such as that from Pfizer], it has to replace the dry ice within 24 hours and again every five days. And you can only open the box one or two times a day. After day 15 from when the vials were produced, they have to be transferred to refrigerated temperatures and used within five days. So there is some time to vaccinate people.

Pfizer’s thermal shipper holds 975 vials. Trucks will take the shippers to planes that will fly them in all directions. About half of medical products are shipped on commercial flights, though, and those flights are way down. Will that be a problem?

I don’t see that as a challenge in the U.S. Cargo companies need to make money right now, so they’ll run extra flights if they need to get the 50 million doses to the locations. You can imagine a hub-and-spoke system shipping direct to centers around the country. They want to cut the extra two days off the lead time: Moderna vaccine first goes to the McKesson distribution center and, from there, goes to the providers — that probably adds a couple of days. Worldwide, however, the challenge of a Pfizer vaccine is quite significant. One study estimated there are only 25 or 30 countries that have the ultracold infrastructure.

Each Pfizer vial actually supplies five doses. How is that handled?

The place doing immunization adds a dilutant, creating five doses. At that point the solution is good for six hours. So a clinic has to figure out how many health care workers or customers will be vaccinated, and it starts the dilution process for that day.

It sounds like places need to line up a lot of recipients so vaccine is not wasted.

What I’ve seen is that each Pfizer tray has 195 vials, each with five doses, so that’s about 1,000 doses. And a box can hold up to five trays. If, in the beginning, you are prioritizing by vaccinating just frontline workers who are handling COVID-19 patients, you’d want to line up enough people at one location to use a tray of vaccines within five days, or have people from the region come to you. States could also purchase sub-80 freezers. The New York State plan says it will set up several regional distribution centers. If they do that, then they will probably have sub-80 freezers at each location. I don’t know if their plan will change now that Moderna has come out with more information.

I think most states will not have the resources to set up regional distribution centers. What I would do if I were them is look for large hospitals that do have the freezers and use those as the points of distribution. I would certainly partner with the regional pharmacies. And I would look at models where you drive some of it around: ship it to one place, then drive a local van around with refrigeration that can store vials for five days. And you can ask people to drive to locations to get vaccinated. I think all of these [steps] will happen. Of course, there will be questions of equity, at least in the beginning, when vaccination is dependent on just the Pfizer vaccine.

What about spoilage? Pharmaceutical companies report that from 5 to 20 percent of other vaccines spoil during distribution.

That will have be factored in. There is a way to monitor the thermal shipper with a temperature probe. In the ideal world, the monitoring would go down to the individual vial, but I don’t know if current technology will allow that. We could look at how Ebola vaccine has been distributed around Africa; it is a specialized cold chain.

What about production quality control?

In usual vaccine production and shipping, potency and stability are checked. Certainly, Pfizer and Moderna are doing that.

All of this is complicated by the fact that each person has to receive two injections, three or four weeks apart. So immediately, the number of people who could be vaccinated is cut in half.

Right. And for each person, your second dose has to be the same as your first dose, either Pfizer or Moderna. But does that persist over time? What if scientists find that people need a booster after two years? Does it matter, then, if I had Pfizer or Moderna the first time around? I’m hoping that it does not, but I’ve not gotten a clear answer.

There are a lot of challenges with the information side of the supply chain. The companies are sending product to distributors, but they are not responsible for who gets vaccinated. That’s the hospitals and pharmacies. How do the manufacturers know when and where to ship product? The different [players] have to do a lot of information sharing.

That’s largely how public health works. There’s one system for ordering and shipping vaccines, but it doesn’t tell you anything after a vaccine has arrived at a location. Then, typically, each state uses its own system for registering who receives vaccine — that’s called the immunization registry. Those two systems don’t talk to each other, so without the addition of another layer, it’s difficult for states to know this location has 50 doses left, this location is completely out — that kind of information. The federal government did invest in a system that would allow such capability, but states may be using their own.

There are systems that can do this — like those that coordinate diagnostic testing. But they will have to be rolled out. They provide two real advantages: One is that you can tell consumers where they can go to get [a] vaccine — not where it’s been shipped but if there’s any left. And if companies know where the inventory is, they can make better decisions about where to send the next batch. Or localities can increase public messaging to raise demand for a vaccine, because we know there will be issues with people being hesitant to get it.

I imagine the vaccination prioritization schedules that we’re just hearing about could make information tracking even harder—you know, frontline workers should get the vaccines first, then teachers, and so on.

The National Academy of Medicine recommends phases: first high-risk workers in health care facilities plus first responders, then people with underlying conditions that put them at high risk, then, later, teachers, then young adults, then the rest of us. There is also talk about sending the early vaccines to areas of high prevalence of disease. All of that complicates the information side of the vaccination challenge.

You can imagine that the Pfizer boxes might be more appropriate for densely populated cities. When we have sufficient supply of any vaccine you want, then the market will choose Moderna over Pfizer — as long as the safety and efficacy are high enough — because of the refrigeration difference. But in the early stages, with so many people everywhere needing vaccine, I think a lot of decisions will be made based on what is best for the system. If we find there is a difference in safety and efficacy, however, then we get into questions of equity: Are you sending an inferior vaccine to the cities or to the rural areas?

Without Fantasy of Trees, hospital still in need of donations to help its littlest patients

Wed Nov 25 , 2020
Over the past three and a half decades, money raised through Fantasy of Trees has helped the hospital purchase several life-saving items for its patients KNOXVILLE, Tenn. — Inside the neonatal intensive care unit at East Tennessee Children’s Hospital, Taylar Collins places the oxygen tube in her son’s nose before […] 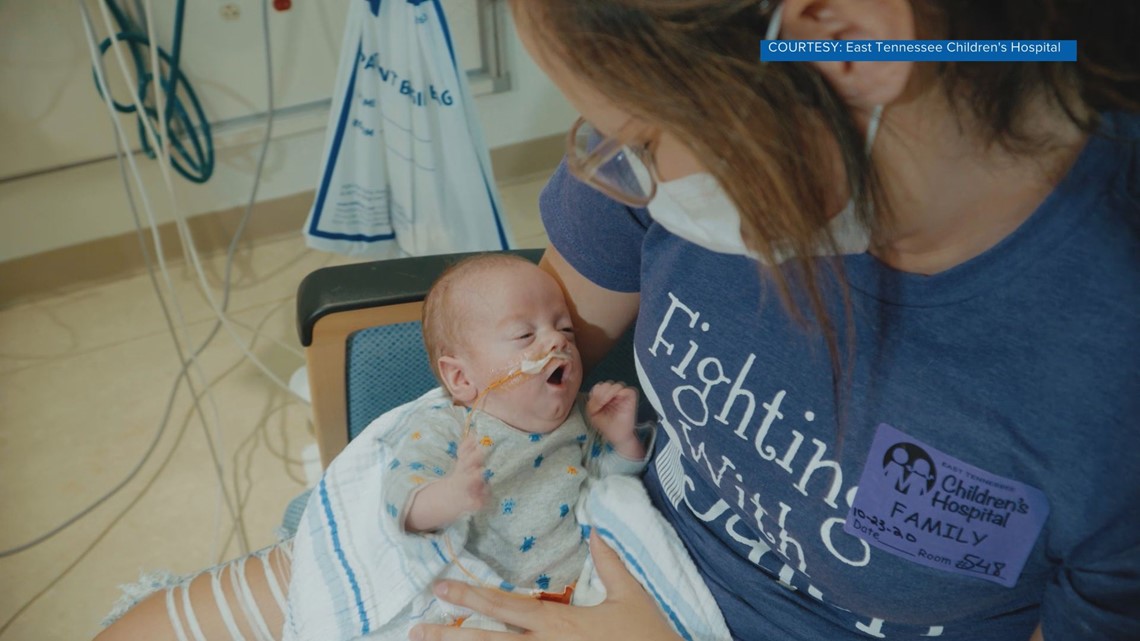